Forgive us … as we forgive … 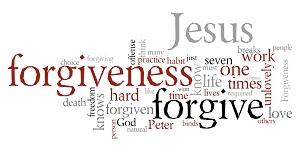 Mt 6:12 Forgive us our debts,
as we also have forgiven our debtors.

As in the previous verses, there’s much more to the Lord’s Prayer than just a bunch of words.  There’s meaning behind those words.  A meaning that we need to understand to really do what Jesus said before giving us these words – use this prayer as a guideline – not simply for what we must pray – but rather for understanding how we should pray.

Forgive us ... as we forgive ... is article #8 in the series: The Lord's Prayer. Click button to view titles for entire series

You may know this portion of The Lord’s Prayer with the words above.
Or maybe you know it with the word debt rather than sin. Or maybe trespass. Maybe something else?

Let’s start by seeing what the original Greek word was, to try to see what the intent is for this verse.

OK – sin looks like a good word to use.
debt is in there as well, although today we generally think of debt as being related to owing money.
what about trespass? Well, it turns out what’s currently the 3rd definition, going out of style, is an offense, sin, or wrong, according to dictionary.com

So we’ll stick with sin, since it’s the most obvious. The New Living Translation (NLT) uses this word as well.

Forgive us our sins

forgive us the moral debts that we have racked up as a result of our sins.

For instance – if we kill someone, we have affected not only the person who died, but a whole bunch of other people who were in that person’s life. They will have something missing in their lives without that person. So maybe we think that’s where the forgiveness needs to come from. But what about the people whose lives haven’t been touched yet, but would have been if the person had lived. How can one even begin to ask forgiveness from those people?

Does that mean we should ask forgiveness from everyone we ever got angry with?

And what about this –

Mt 5:27 “You have heard that it was said, ‘Do not commit adultery.’ 28 But I tell you that anyone who looks at a woman lustfully has already committed adultery with her in his heart.

If we were to commit adultery, are we to ask forgiveness from the various parties involved?
And what about the thoughts of lust? Just think about that one. Imagine telling someone that you lusted after them. And then asking for forgiveness for what you thought. And what about the act of telling the person? Ask for forgiveness for that as well – since that direct act of telling them probably had more of an impact than any indirect act that may have accompanied the original thought.

You can see – this gets really messy.

There is one other “person” involved with every single sin though. That would be God. Every sin we commit is against one of His children or some creation of His. The only One who we can truly ask forgiveness for every sin we commit is God. That’s why this prayer that starts with Our Father in Heaven refers to Him when we ask forgive us our sins / debts / trespasses.

Please note – this doesn’t resolve us of all responsibility when it comes to the impact of our sins on other people. While it’s not included in The Lord’s Prayer – Jesus does speak to this topic –

Mt 5:21 “You have heard that it was said to the people long ago, ‘Do not murder, and anyone who murders will be subject to judgment.’ 22 But I tell you that anyone who is angry with his brother will be subject to judgment. Again, anyone who says to his brother, ‘Raca,’ is answerable to the Sanhedrin. But anyone who says, ‘You fool!’ will be in danger of the fire of hell.
Mt 5:23 “Therefore, if you are offering your gift at the altar and there remember that your brother has something against you, 24 leave your gift there in front of the altar. First go and be reconciled to your brother; then come and offer your gift.
Mt 5:25 “Settle matters quickly with your adversary who is taking you to court. Do it while you are still with him on the way, or he may hand you over to the judge, and the judge may hand you over to the officer, and you may be thrown into prison. 26 I tell you the truth, you will not get out until you have paid the last penny.

The key line here is –

Mt 5:23 “Therefore, if you are offering your gift at the altar and there remember that your brother has something against you, 24 leave your gift there in front of the altar. First go and be reconciled to your brother; then come and offer your gift.

The context gives us an idea of when this applies. It’s for those sins where someone has something against us. Looking up the word “brother” gives more details on who we are meant to actually reconcile with –

80 ἀδελφός [adelphos /ad·el·fos/] n m. From 1 (as a connective particle) and delphus (the womb); TDNT 1:144; TDNTA 22; GK 81; 346 occurrences; AV translates as “brother” 346 times. 1 a brother, whether born of the same two parents or only of the same father or mother. 2 having the same national ancestor, belonging to the same people, or countryman. 3 any fellow or man. 4 a fellow believer, united to another by the bond of affection. 5 an associate in employment or office. 6 brethren in Christ. 6A his brothers by blood. 6B all men. 6C apostles. 6D Christians, as those who are exalted to the same heavenly place.  3)Strong, J. (1995). Enhanced Strong’s Lexicon. Woodside Bible Fellowship.

One could be tempted to think this means only believers. The problem with that though – we don’t really know who is a believer. We also don’t know who might start on the journey to get to know God and become a believer by our act of trying to reconcile. This act of bringing a light to a non-believer may be the very thing that makes them wonder what we have that’s different and missing from their lives.

Anyway – just wanted to bring that up. I’m not going to go into more details on it now.

The important thing to note is that for this instance of The Lord’s Prayer – is that we need to ask the Father for forgiveness.

As we forgive those who sin against us.

And here’s the rub. When looking at the full verse, we read –

Forgive us our sins, as we forgive those who sin against us.

So – Jesus tells us the way we should is to ask God to treat us the way we treat others.
We are actually telling Him that if we don’t forgive others, then we aren’t asking Him to forgive us either.
If we only forgive others for the trivial things they did to us, then He should only forgive us for the trivial things that we’ve done to others.
If we forgive everything that others have done to us, then – and only then – are we asking The Father to forgive everything we’ve done.

Think about that. When someone does something horrible to us / a friend / a family member – and we refuse to forgive them, then we are telling God that we don’t want Him to forgive us either!

This is make or break thing. The verses we’ve looked at from Revelation regarding preparation for the Marriage Feast of The Lamb say –

Rev 19:7 Let us rejoice and be glad
and give him glory!
For the wedding of the Lamb has come,
and his bride has made herself ready.
Rev 19:8 Fine linen, bright and clean,
was given her to wear.”

This is the prayer that Jesus tells us to use a model for our prayers – this then is how you should pray.

Do we realize that this prayer may be asking The Father to not forgive us?
If we look at this prayer as part of our preparing ourselves for the wedding of the Lamb – preparing ourselves for eternity in Heaven – then we must realize that by refusing to forgive someone –
we are saying “No” to the Lamb.
We are saying “No” to Jesus.
We are saying that we’d rather live apart from God than forgive someone for what they’ve done to us.