Hallowed be thy name.

What does that mean?

Do you even use the word “hallowed”?

Is it yet another word that’s been “watered down” to the point where it means nothing like it used to? 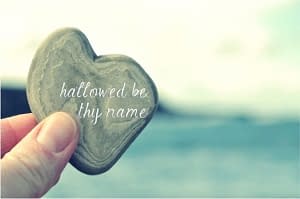 It seems important to be able to answer these questions – since we’re saying God’s name is hallowed.

Hallowed be thy name is article #4 in the series: The Lord's Prayer. Click button to view titles for entire series

What does it mean?
That’s coming.

Is it watered down?

Seriously!  This is from dictionary.com

Yes – it’s been watered down to the point where God and political institutions are now both “hallowed”!

That’s as an adjective.
Check this out for when it’s used as a verb –

verb (used with object)
1. to make holy; sanctify; consecrate.
2. to honor as holy; consider sacred; venerate: to hallow a battlefield.

I’m not sure, but this seems even worse.  Especially if the two definitions are intertwined.
For instance – in the case of “hallowed political institutions” – clearly it’s people that are making these institutions hallowed.  In and of themselves – these institutions – they are nothing.  Depending on the people in them – like our Senators or Congress people – they could be regarded as either “good” or “bad” – depending on the point of view of the observer.  The vast majority of Americans consider the current Congress to be pretty much useless.  Some regard that as bad, since they’ve done very little – therefore the assumption that they haven’t done good.  On the other hand, the act of doing little or nothing could be considered good – in that they haven’t done anything really bad!
But who among us would consider them “holy, venerated, sacred”?  I hope at least no Christian would ever say that.

So – is it watered down?

For Christians – given that we wouldn’t consider political or other man-made institutions to be holy or consecrated – I’d say it is most definitely watered down,  At least as far as we are concerned.

For non-Christians – they may very well not consider the term watered down at all.  Some people who hold other religious (such as Jews and Muslims) views may take the same view as Christians – that only God is sacred.  However – for those who do not hold these views – they may think that we have the wrong definition.  The very fact that the dictionary has hallowed political institutions as an example shows the truth of this statement.

What does it mean?

If we – as Christians – start to accept the “new” definition of the word hallowed to include man-made things like political institutions – then we are watering down the very word that Jesus used to describe Our Father – His Father – God.

Oh sure – we say we understand the difference.  And maybe some of us do.  But what about years from now?  When this new / watered down definition is in vogue long enough – will people still remember?  I doubt it very much.

Evolution used to be used to describe divine guidance in the changes of plants and animals in the world.  Darwin essentially started the change of meaning in that word.  Now – it has completely changed – and Christians are now fighting against the very word that some of the “great” Christians, like C. S. Lewis, used to use to describe their beliefs.  For C. S. Lewis – and other “old earth” creationists – evolution was the term they used for their explanation of how creation took place over 7 periods of time – and not 7 literal days.  Now – evolution has removed God from the word and what it means entirely.

Marriage is another of those words.  It had always been used to describe a special union between a man and a woman.  Now – it’s politically incorrect to say that.  People are aware of it now.  But how long will it be until the current struggle over the word is forgotten?  The original word very much included God – and His statements in Genesis about a man and a woman becoming one.  Now – that reference is being removed.  And at some point – will be forgotten.

Hallowed – is it destined to go down the same path?  Will there be a day when it’s politically incorrect to consider God any higher than our political institutions?  Think that’s ridiculous?  While the word hallowed itself isn’t under attack – the concept certainly is!  One of the candidates for President – Hillary Clinton – has already said “deep-seated cultural codes, religious beliefs and structural biases have to be changed”.  This was to support what she called “reproductive health care and safe childbirth.” – but was actually referring to a woman’s right to have an abortion.  Yes – the concept – if not the word – is definitely under attack already.

If we were to just pray with the word hallowed without regard to what it really means – what it meant when Jesus said it –
then we’d blindly say that our Father is a little below our man made institutions!

Is that the conclusion you want to have in your life?

The Father that Jesus referred to – He’s my Father as well.
And He is in Heaven.
And He is holy – above all else – not because I said He is, but because He really is.

Would you rather have this conclusion for your life?